Discovered in 1940 by a teenage boy, the cave of Lascaux, located in the Dordogne region of France, opened the world’s eyes to the beauty and sophistication of prehistoric cave art.  Preserved for over 17,000 years, the images are life-like and depict the animals that roamed this area of France at the time the paintings were made. The paintings are striking not only for their rich color but also for the realistic reproduction of the animals, the shading to indicate form and shape, and the primitive attempt at the portrayal of perspective, something that would not be addressed, let alone mastered, until the Renaissance.

Since the discovery of Lascaux, many more sites have been found in this region.  In 1979 UNESCO designated the Vézère River Valley, of which Lascaux is a part, as a World Heritage Site that includes 197 prehistoric sites and 25 decorated caves.

According to Wikipedia, http://en.wikipedia.org/wiki/Lascaux the original cave was closed to tourists in 1948 because of severe deterioration of the paintings due to the carbon dioxide humans introduced into the cave.  Since that time, the French government has made it possible for us to see the main part of Lascaux with an exact replica called Lascaux II.

During the upcoming boutique tour to the Dordogne, we will spend an entire day exploring the Vézère River Valley including a guided tour in English of Lascaux II.   During the day, we will visit a giant limestone cliff on which there is evidence that ancient, as well as medieval, man lived and a medieval village.  There will be an opportunity to visit Les Eyzies (considered the town of prehistory) and the famous Museum of Prehistory, which has the 3rd largest collection of prehistory artifacts in the world.  (Photo of St. Léon-sur-Vézère courtesy of Rob at http://www.ourfrenchgarden.com)

Lascaux II has a website where you can get an idea about what the cave looks like and some of the drawings and symbols seen in the cave.  Click here for the English language site.  The site is vast and takes a little time to get acquainted with it.  The music can be turned off by clicking the word ‘sound’ at the bottom of the page.  After clicking on ‘Visit the Cave’ just under the word ‘Lascaux,’ an informative map appears in the lower right hand corner indicating where in the cave the photos are located.  Also, a menu will appear by moving your curser to the left of the screen. Clicking on the separate photos will bring up a menu with links to additional, and more detailed, information.   Screen

The Bradshaw Foundation offers an interactive map showing the migration patterns of humans out of Africa with a timeline.  It also indicates periods of different ice ages.

There is an opportunity to see another splendid painted cave near Les Eyzies, Font-de-Gaume.  This beautiful bison is from that cave as did the tender painting of the reindeer above. 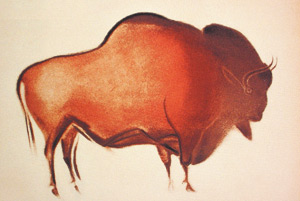 All painted caves have similarities and differences.  In my opinion, would be well worth seeing this second cave to get a sense of how other caves differ.  Also, one day these beautiful prehistoric masterpieces may be closed to the public.  The following paintings are found in Font-de-Gaume.